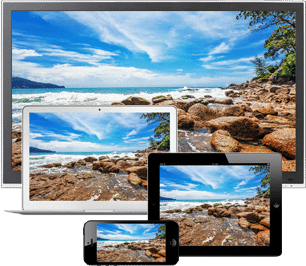 RTMP is ideal if you require low latency, though in recent years it has become outdated and as it is based on Flash, it may lack support within some browsers and devices.

Despite these disadvantages it is ideal to use RTMP as a transport stream, it can be transcoded into other formats such as HLS which can be distributed more easily.

HLS, originally developed by Apple is a very scalable and flexible protocol compared to RTMP. It is supported by a wide range of devices and browsers and it is fully compatible with our CDN, which can distribute it worldwide at a good latency.

HLS is supported on desktop browsers, smart TVs, and both Android and iOS mobile devices. HTML5 video players also natively support HLS, in comparison with HDS and RTMP. The HLS is the safest protocol today for scaling live streaming to larger audience.

Coming to the features, the HLS standard also supports adaptive bitrate streaming. The one major drawback is with the latency. The latency can be relatively high. But, there are methods for reducing HLS latency.

RTMP used to be the de facto standard for live streaming. Many CDNs offer delivery that scales to the masses. RTMP, however, does not take into consideration that broadcaster and viewers might have internet connections that aren’t always up to the task of transferring the stream at full speed. Smartphones and web browsers are also unable to play back RTMP natively; Browsers used to depend on a flash plugin for playback, which has been phased out over the last couple of years.

1. The actual installation process of a Flash Media Server is simple, effective and appears to be trustworthy since the protocol was established 10 years back.

2. RTMP has an exceptional feature where it provides low latency while transmitting live broadcasts.

3. The protocol has the potentiality to transmit audio and video on any formats and rendition.

4. It also supported universally due to its effectiveness in implementing for live streaming.

1. It does not have native support in iOS.

2. RTMP does not work in HTML5, it differs from the HTTP Protocol.

3. The security of delivering video is minimal.

1. HLS is a pocket-friendly protocol which is Compatible on all the platforms and supports HTML5 video player.

2. Helps to stream to reach more viewers and also the safest protocol to scale up the content to a massive base audience.

3. The biggest advantage of HLS is that it has the potentiality to deliver adaptive bitrate streaming where the quality of the content to be expected at a high pixel-rate.

1. HLS has latency which is relatively high when compared to RTMP.

Depending upon the device support, security features, playback capability and more, you can choose between these two.

Real-Time Messaging Protocol (RTMP) is a standard originally developed by Macromedia in the mid-200s. Designed for streaming audio and video in the mid-2000s, this protocol is frequently referred to simply as Flash. Macromedia later merged with Adobe, which now develops RTMP as a semi-open standard.

For much of the past decade, RTMP was the default video streaming method on the internet. Only with the recent rise of HLS have we seen a decline in the usage of RTMP. Even today, most streaming video hosting services work with RTMP ingestion. In other words, you deliver your stream to your online video platform in RTMP stream format. From there, your OVP usually delivers your stream to your viewers via HLS.

When to use HLS streaming?
We recommend adopting the HLS streaming protocol all of the time. It is the most up-to-date and widely used protocol for media streaming. It does have one disadvantage, which we mention above–HLS has a relatively higher latency than some other protocols. This means that HLS streams are not quite as “live.” In fact, with HLS viewers can experience delays of up to 30 seconds (or more, in some cases). However, for most broadcasters this isn’t a problem. The vast majority of live streams can handle a delay like that without causing any sort of user dissatisfaction.

If you’re streaming over the RTMP Server, don’t worry! You’re already using a fully compatible HTML5 video player. Content delivered via RTMP Server defaults to HTML5 delivery. However, it will use Flash as a backup method if HTML5 is not supported on a given device or browser. This means that even older devices will have no problem playing your content over your RTMP Server account.

This website uses cookies to improve your experience while you navigate through the website. Out of these cookies, the cookies that are categorized as necessary are stored on your browser as they are as essential for the working of basic functionalities of the website. We also use third-party cookies that help us analyze and understand how you use this website. These cookies will be stored in your browser only with your consent. You also have the option to opt-out of these cookies. But opting out of some of these cookies may have an effect on your browsing experience.
Necessary Always Enabled
Necessary cookies are absolutely essential for the website to function properly. This category only includes cookies that ensures basic functionalities and security features of the website. These cookies do not store any personal information.
Non-necessary
Any cookies that may not be particularly necessary for the website to function and is used specifically to collect user personal data via analytics, ads, other embedded contents are termed as non-necessary cookies. It is mandatory to procure user consent prior to running these cookies on your website.
SAVE & ACCEPT